Yes, We’ll Say it: Poverty is A Women’s Issue.

We know that poverty is sexist.

We know that when women succeed, communities succeed.

We know that we cannot make long-term progress on women’s rights unless the most marginalized are at the forefront.

The theme for International Women’s Day 2017 is #BeBoldforChange and to celebrate the day we want to recognize that it’s time to be bold. We won’t shy away from tackling “women’s issues” head on.

The pay gap, the prevalence of precarious and minimum wage work, lack of affordable and accessible childcare and reproductive healthcare are issues that impact all communities and people of all genders. At the same time, they tend to impact women and female single-parent households more. Women are disproportionately represented among those who are precariously employed or engaged in minimum wage employment. Women are also more likely to head single-parent families.

Despite these statistics, modern discourse frequently shifts away from identifying these areas as women’s issues – for fear that they will be relegated to obscurity, that the language will alienate men or cause them to feel uninvited when they are so critical to the conversation, or devalue the conversation through its femaleness. How often in the non-profit sector do we hear “this isn’t just a women’s issue, it’s an issue that affects everyone”?

This women’s day, we want to challenge this idea. Childcare, the pay gap, and reproductive health are women’s issues, but calling them women’s issues should in no way devalue their importance to our male allies. These are areas which disproportionately affect women – especially women in poverty. This shouldn’t mean that only women can or should care about the issues. 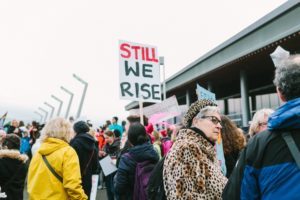 In some cases, conscientious inclusion is vital, such as making space for transgender men in reproductive healthcare discussions; but in others, it is disingenuous to pretend that the issues do not impact women most for the sake of neutrality or out of fear that anything centering women will automatically be viewed as inferior.

It is essential to consider policy with the meaningful input of those who are most disproportionately impacted and marginalized. In some cases, specific groups face  discrimination that transcends even the data that is gathered, as is the case for transgender women in Canada. In other areas, like the gender pay gap, all women may be subject to it, but it is those women who are racialized who feel the most significant sting and are most likely to live in low-income.

Reviewing budgets and policies through a gendered and rights-based lens forces governments to consider the impact on those who fall outside of those with privilege: “[w]hat appears on the surface to be ‘gender neutral’, which would be expected to impact equally on men and women, may on closer examination be seen to be ‘gender blind’. That is, the impact of the policy of budget expenditure may affect one gender very differently to another.”

Of course, it is tempting to say that challenges like childcare, employment parity, and intimate partner violence are “not just women’s issues” to bring more people to the table and make sure these critical issues don’t go unaddressed. But fear around feminizing issues often stems from the same attitude that reflexively views a Minister moving from Democratic Institutions to Status of Women as a “demotion”. Women’s issues must not be relegated to the sideline; they should demand our attention because we must do better for the 1.5 million women living in poverty.

At a recent presentation at the Standing Committee on the Status of Women, Canada Without Poverty declared that, globally, the women’s movement is more energized than it has been in a long time. Through conscientious, inclusive, and intersectional policy-building and advocacy which emphasizes human rights and dignity above all else, we can bring about social change without saying there’s nothing gendered about women’s issues.